For Simon Mayor, words and music have been happy bedfellows for 40 years and counting.

His reputation as one of the world’s leading mandolinists is long established (and documented elsewhere), but it’s the dry humour, the riot of ludicrous anecdotes (all true!) and off-the-cuff wit that regularly sends audiences home with broad grins on their faces.

In 1996, with three solo albums under his belt and an already established musical reputation, Mayor was commissioned by BBC Radio 2 to write, produce and present a three part documentary on the mandolin, its history and its players. Laced with his trademark off-beat humour, Marooned With A Mandolin achieved the rare feat of engaging a mainstream audience with a seemingly non-mainstream subject.
‘The best programme on Radio 2 this week.’
Gillian Reynolds, The Independent On Sunday.

His first venture onto the printed page was in that most esoteric realm, the world of mandolin tuition. His book The Mandolin Tutor (1995), the follow up Mastering The Mandolin (2003) and four subsequent repertoire books continue to be praised as much for their clear and engaging language as for their musical content.

Offers of journalism came in regularly, and in 2006 he began a ten year relationship with Acoustic Magazine as regular columnist, reviewer and ‘go to’ person for all things mandolin. He has also written for many other music magazines including The Living Tradition and fRoots. 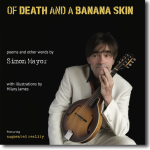 2018 saw the publication of his first anthology of poems and anecdotes. The quirkily entitled Of Death And A Banana Skin, illustrated by Hilary James, this saw the famous humour rubbing shoulders with more serious writing.

‘Quirky, touching and full of wit. The freewheeling mix [of Mayor’s live shows] translates to the page with a natural and engaging ease.’
Songlines Magazine

‘Mayor has within him the wherewithal to leave a mark on cultural history.’
R2 Magazine

‘Uplifting… made me laugh a lot… philosophy thrown in as well… magic… this is the start of something big…’ Sean Rafferty, BBC Radio 3

From the start, song lyrics held as much fascination for him as melody. In the 1980s, with Hilary James, he became heavily involved in music education. Frustrated by the dearth of decent songs for children they set about writing their own. It was the start of the Musical Mystery Tour series of albums and later, The Musical Mystery Tour Songbook published by Faber Music: original songs loved by grown ups and children alike for the intelligence and wit of the words as well as the quality of the musicianship.

‘Leading the crusade against the saccharine rubbish that often passes for children’s music.’
The Dublin Herald

The two have continued to work extensively with young people in theatres and schools. For the BBC, They presented Play School and for six years were regular hosts of BBC Music Education programmes. They have now written over fifty children’s songs, many featuring on other classic British children’s series such as The Listening Corner and Green Claws. Their songs have also been used extensively in education, including English language teaching courses for Danish schoolchildren.

They have also written satirical and topical songs for BBC news programmes including Newsnight. A huge fan of fellow Yorkshireman, the late Jake Thackray, Mayor has occasionally performed a special programme of Jake’s songs.

There can be few writers who have entered the UK’s Classical Artist Top Ten, but in May 2000 Mayor did just that with a major ‘best of’ release of his own compositions and classical works on Universal Records.

‘Simon’s dry humour and immaculate sense of timing was a joy.’ Moffat News

‘With Simon Mayor’s first note the audience came to life. It was they who made sitting on a hard seat ’til midnight worth it.’
Arran Festival

‘Simon is a genius… add to that a warm, funny, relaxed manner and you have a monstrously enjoyable evening.’
Folk North West 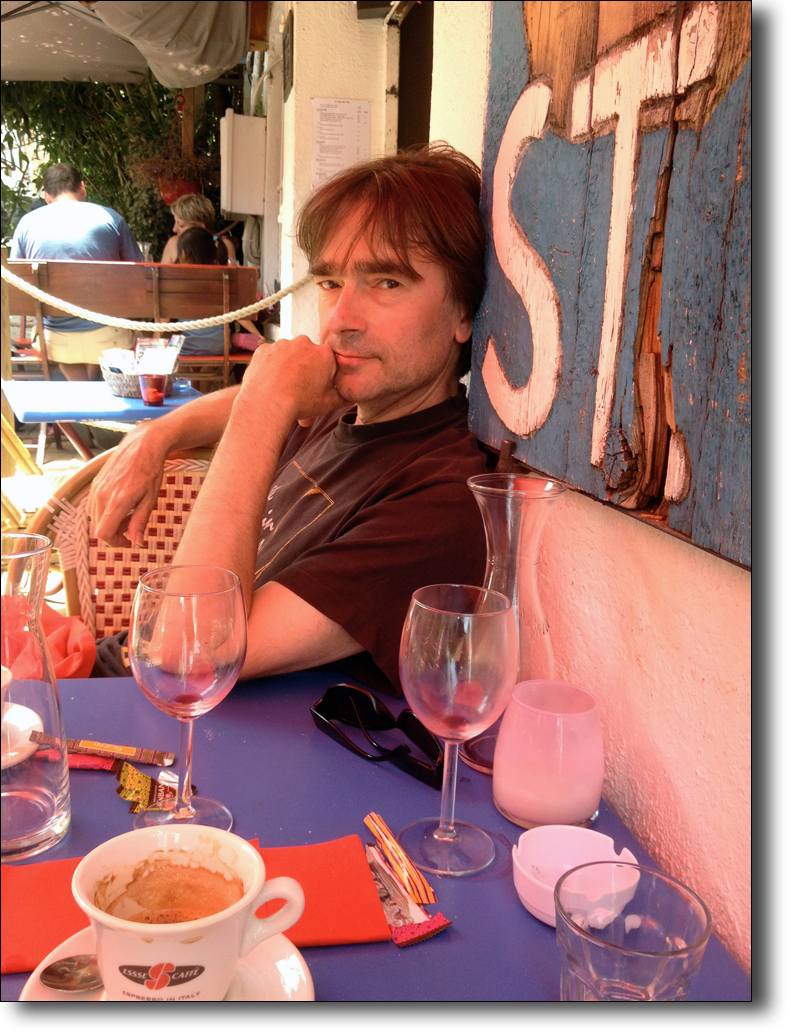 After some searching, we (Hilary James and I) eventually found a photo where I wasn’t holding a mandolin, and it was suggested this particular one might look like a poet thinking deeply about the meaning of life. Maybe.

The truth is that I’d just been mellowed by a spectacularly good meal at a café in Grimaud washed down by some local Provençal wine; the sun was shining, all was well with the world, and that was all the meaning life needed at the time. We also happened to like the colours of the hoarding, the evidence on the table and the rosy tint offered by a diffused Mediterranean sun.

At that moment, poetry was the last thing on my mind, closely followed by playing the mandolin. But there have been other moments.

Here’s a biography and some embarrassingly flattering press quotes; if you want to read more about my music, head on over to: